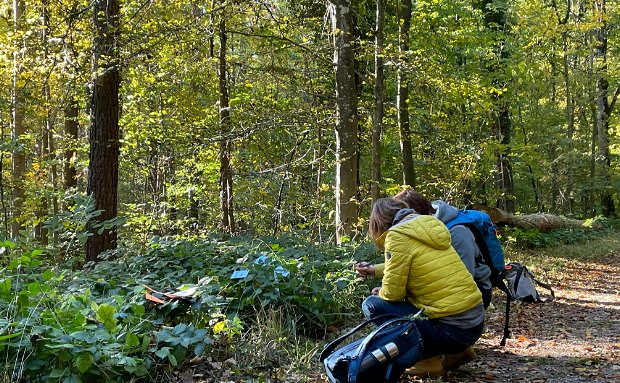 A couple of weeks ago, I drove north of Zürich to visit a friend of mine. The traffic was busy, airplanes flew over my head, the weather was grey and misty. Not a day to see wonders of nature, one would say.

But how wrong can we be. We don’t have to go to a national park, to travel long distances or to fly to Africa to find nature. Nature is everywhere, it is around us, as long as we are willing to see it.

The busy road I was driving went through villages, industrial estates, but also through woods and along meadows. And all of a sudden, I saw something spectacular: a meadow full of white storks. They were pausing, eating, gathering. I looked up at the sky and saw some new arrivals approaching. It was an amazing sight.

A few days before, I had already met two storks, feeding on sugar beets, eating so concentrated that they hardly had time to notice me or the dogs. Now it became clear to me why they had been there: they had had a date, they were there to join the other storks, prior to their long journey to Africa.

Most storks migrate in winter to warmer areas, and right they are, but it’s a long and dangerous trip. Flying together increases the chance that the common goal will be reached, and therefore the storks fly in groups. They gather at fixed meeting points, in this case a meadow north of Zürich, along the road, close to the airport. They meet, they prepare themselves, they rest, and then they leave. As a group, so that they can protect each other, look for danger together, search for food together.

Just like a team, the group of storks is stronger than the separate parts. Most storks wouldn’t make it on their own, and they know it. We humans also know this, and therefore we work in teams. We use each other’s expertise, each other’s strengths, we work hard, every day, to function and to operate as a real team.

It’s beautiful to see how nature, in this case the storks, teach us the power of cooperation. For the storks, it’s a matter of life or death. For us humans, teamwork is a matter of success or failure. Kambaka Nature Team Coaching uses the power of nature to coach and support teams in becoming more effective and more successful. The storks show us why and how.

What our clients say